The end of September realised another landmark – six months since I retired from full-time employment. I have had numerous conversations with friends over this “whole retirement” thing, and how easy, or not, it is to adjust to life outside of “full-time work”. Retirement would no doubt be difficult without the financial resources or indeed health to enjoy it. Of course you would assume that most people thinking of retiring “do the maths” as part of that process, and unless you have access to significant other financial means I think everyone accepts that retirement means surviving on less money. Is that actually a problem? Well, there is no doubt that everyone has to live within their financial means regardless of whether they are working or not – and retirement doesn’t change that. What it does mean through is that if you do “overspend”, you are less able to replenish those “gold stocks” through working. So the “note to self” is don’t overspend!

The other great lesson I have learned in life is that “financial standing” has very little impact on the state of your health. As much as we all no doubt endeavour to live “healthy” lives, sometimes the cards are simply just stacked against us. Luckily I have been in relatively good health all my life, and two replacement knees have done wonders for my mobility. So retirement was going to provide me with new opportunities to do the things we have planned to do together, travel, walking and for me, writing. And that is exactly what the first six months has been about. Yes, there have been some hiccups along the way – but, it looks like we are back on track. I started having issues with both hands in June that stopped me writing – the diagnosis was suspected carpal tunnel. Then in August the problem spread to my arms, legs and shoulders. Polymyalgia Rheumatica (PMR). Wikipedia states that it is thought to be brought on by a viral or bacterial illness or trauma of some kind, but genetics does play a factor as well. With the diagnosis now confirmed I have my very own “dispensary in a plastic container”, and look forward to popping pills for the next twelve months or so. I can now again put my own socks on, tie my own shoe laces, and dress myself without assistance. And just as important, as the autumn weather prevents me walking the coast of Devon – I can return to my other passion of writing, albeit with a permanent tingling sensation in both hands.

So on to the “bucket list”. Yes I have one, but most of its not written down. Scotland has always been one of those places I wanted to visit. We have been to Edinburgh to see the Tattoo, but nowhere else. Whilst I am not usually allowed to plan holidays by the boss (after taking her to Laganas, (Zante) for a week where we witnessed at first hand the antics of the 18-30 brigade. A cross between watching a live sex-show, whilst being locked in your worst pub filled with a binge-drinking mob.), she does allow me to plan UK or trips to France that involve driving. Of course, I have to run the itinerary past her first, and then pray to god that the reviews I have based my decisions on turn out to be correct when we get there.

Our journey through Scotland centred on the Highlands. I used the well-established tourist locations as a guide.

Gretna Green – it was a convenient overnight stop between Nantwich and our first real stop at Balmaha, on the banks of Loch Lomond. I’m glad we stopped at Gretna, but just say “once is enough”. You can only put so many gift shops in one location and Gretna Green has gone one better. Yes, the history of how it became the place to elope to following the 1754 Marriage Act, and the role of the Blacksmiths shop are interesting, and the museum is worth a visit, but you won’t be in there that long!

Our journey took us up the Western side of Scotland through the Highlands. We stopped over at Loch Lomond, Glencoe and Loch Ness, before travelling further north to Inverness, Culloden and Aviemore before travelling south to Stirling.

The sheer beauty of the scenery is impossible to put in to words; it has to be seen by the naked eye. Our trip was not accompanied with ideal weather, and very much like our trip to the Lake District many years ago, the whole two weeks was spent almost entirely in the presence of rain, drizzle, or dark clouds. However, as I was reminded by a member of a Scottish group rambling in the Nevis Range “you woodnt git the viw if yu dinna ave the weather!” We “rambled” in the Nevis Range with the wind and rain coming at us horizontally. We got to the viewing point on Aonach Mor (at 2000ft) despite the wind doing its best to remove us from the mountain ( or the “munro”as it is called), and we stared at the majestic beauty of Loch Lomond. 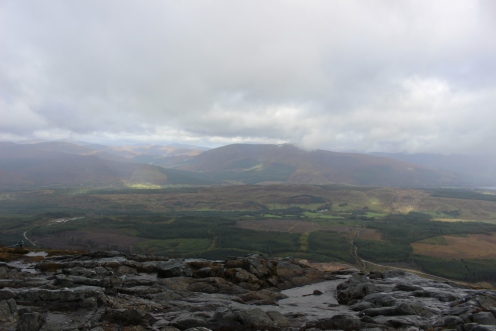 The view from Aonach Mor

We learned much about the history of Scotland, and the Scottish people. We were welcomed wherever we went; the people were friendly and hospitable. In trying to understand more we visited the memorial to the Glencoe Massacre and the site of the Battle of Culloden, and whilst not being a fan of the nationalistic cause and an independent Scotland, perhaps the trip has given me a greater insight to the history of this wonderful part of the UK, and why that call exists. 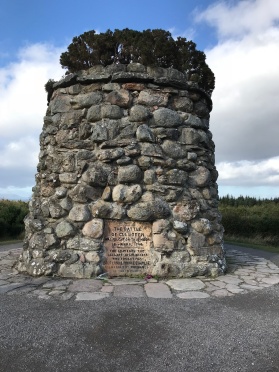 Our journey covered just under 1500 miles, stopping at Nantwich on the way up and Keswick in the Lake District on our return. In our effort to pursue the perfect holiday we often seek far-away destinations and of course the “sun”. In retirement we have the time to plan, we don’t need to fit our immediate requirements into a two week period at the behest of our employers. Whist we have only covered a miniscule part of what Scotland has to offer on this occasion the elements we have done have given us an understanding of its history and a vision of its beauty. 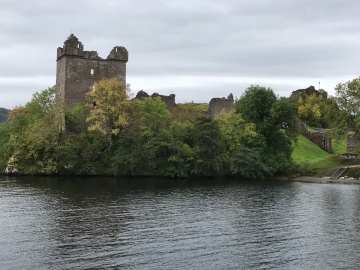 Urquhart Castle on the banks of Loch Ness

So what next? Well the plan we put in place for that period immediately following my retirement have pretty much gone as planned – time spent away at the caravan, and an extended trip to China, supplemented of course with plenty of time with the grandchildren.  A bit of a hiccup as my writing plans were de-railed for three months, but plenty of time over the Autumn/Winter period to catch up.  And what of former work colleagues – do I see them? Well again my initial thoughts, or expectations as to what would pan out have been fairly accurate. I have been well chuffed with the efforts of a handful to keep in touch, and to meet up occasionally.  Providing a “mentoring” role to some of these, without having the direct attachment to the business has distinct benefits. And  from a selfish prospective, the fact that they have confidence in my ability to provide that is very satisfying.

So, as they often say in Game of Thrones – “Winter is Coming”, and whilst I don’t have any particular fears of an impending attack from the Night King and his army of White Walkers, it will no doubt have its challenges. Our time at the caravan reduces, the weather changes and I will not be concerning myself with the “total volume of outstanding leaks” or dealing with “a rise in burst mains as temperatures plummet for three months.”  A trip to Vienna in December and two weeks in the Caribbean in February are to be looked forward to  – some reading and of course the progression of my personal memoirs.