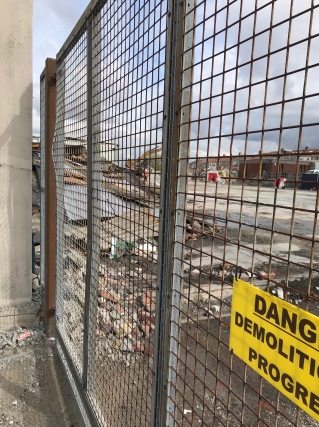 And so, several years after the last of the staff left they have began demolishing the former Bristol Water Depot on Bishopsworth Road. I stood and watched for several minutes as bit by bit the walls came down. And then there was a pause, and I hear noises – ghosts from the past perhaps?

“The wheels of the tea trolley rumbled over the concrete floor, the doors at the end were open and the wind whistled through”.

“Of course we do, and where is the bloody biscuits? Big John Peters had big hands, a deep voice and a heart to match.

“There aren’t no biscuits John, they are cutting back” replied Beat, as she poured good old “builders tea” from a very large tea pot. 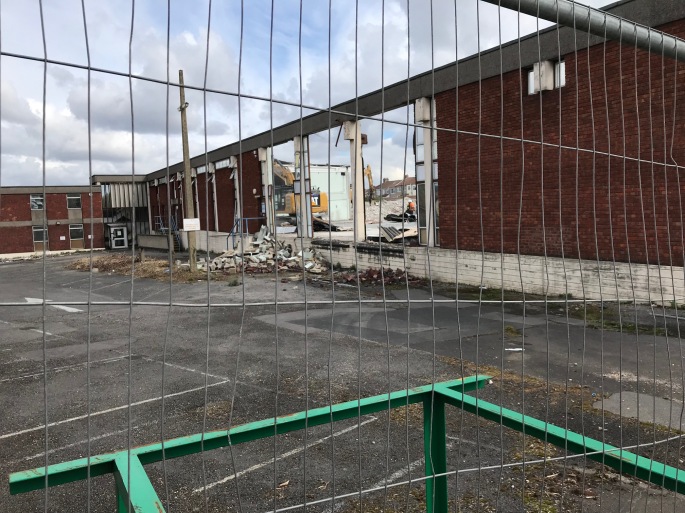 The Depot was a hive of activity from morning until night. Men in long gabardine mackintoshes, adorning peaked hats collected their meter reading books before jumping in their two-tone Morris Minor vans and heading out for a day’s toil. The day for many was a simple routine, stopping at Press Newsagents opposite on the way in to work and pick up their fags and a morning paper. At the end of the day the reverse – collect a copy of the “Post”, and top up with 20 Embassy, or No 6 – not many “roll you own” bods – too much hassle when your knee deep in water. Around 150 staff making the Depot their first point of call in the morning. You didn’t take your vehicles home in those days. If you couldn’t park your car in the Depot then Ilchester Road was a good spot.

In the winter when it snowed we would sit on the wall and watch the cars and Lorries attempt to negotiate the hill up from Bedminster. Press Newsagent had left their corrugated cabin and taken over the Wool Shop next door, the cabin was now occupied by a taxi-company. Moylan’s, Ted Coombes (The Barber), Sticklers, the Post Office, Amburys Chemist and Long’s Wet Fish Shop all adjacent to Press’s. Further up the road was two Grocers Clarkes Gro and further up Bryant’s (where Cardill Close now is). Of course on the opposite side of the road was Dyer’s Fruit & Veg, and Zion Methodist Church, where I sit this lunchtime, once again contemplating the past history of my beloved “Bemmy Down”. Over the years they have all gone – its progress they say!

The covered yard of the Depot became a bit like a street market on some days , as certain employees wandered up and down selling a multitude of “questionable goods” – including towels, tea-shirts, dodgy cigarette lights and of course cigarettes themselves. On Thursdays at 4pm we would line up and collect our weekly pay packets. Small brown envelopes with little holes in the front and with the corner cut off that allowed you to count your notes and any loose change before opening.  On Friday morning’s John Williams would do his rounds collecting money for the Christmas club, something many of us relied upon.

Over the years the people and the roles changed. We moved to monthly pay, and vending machines replaced the canteen. I like others have many great memories that are embedded in the fabric of the Building that once stood opposite the Cross Hands PH. It has stood on the corner of Bishopsworth Road for as long as I can remember. I passed it every day on my walk to school from our family home that sat at the back of it.

When the Depot closed a few years ago people lost their jobs, not many I know – but it doesn’t matter how many does it, they all had families and mortgages. People are important, its people that make the communities that we all live in. It’s those communities that give us a sense of prospective on what is going on all around us.

A hundred and fifty years ago Bedminster Down was a pub, and there was nothing much else between the Cross Hands and Bishopsworth Village. Miners from South Wales made their way to the area to work in the pits in Ashton Vale, and slowly the community of Bedminster Down grew. As the community grew so the need for “facilities” grew with it. Small independent shops, supplemented by your local delivery service from the butcher, grocer and veg man were at the heart of the community. And then of course the big conglomerates arrived sucking the blood out of those who had for years sustained a moderate living by supplying all our needs. The local shops disappeared, our great national mobilisation plan replaced bicycles with cars, and our communities started unwinding as we all found the world outside of it more interesting. We lumped our kids in the cars and took them out of the community for such things as schools, sport clubs, and of course holidays. The need for providing young people with activities locally was waning and with it when attendance at Youth Groups. Youngsters decided that hanging about on street –corners, and now –sat in front of a games consul was far more interesting.

So where does that leave us? Well I see many of those that voted with the feet as youngsters many years ago now complaining as parents, that there is nothing to do locally. That they are plagued with vandalism and theft, and of course that nobody is listening to their issues.

Of course, some of what is being said is correct, especially the bit about “nobody is listening”. As a society we have lost the art of listening and understanding, from Governments to Local Communities and especially Parents.

As I write this from one of the last bastions of local facilities on Bedminster Down the Memory Club are having lunch. The “Writers Club” will start in an hour and yesterday it was the Music Group. Along the road the Blenheim Scouts still operate and The Grove is still doing its best to survive continued financial hardship to provide a safe place for young people on a few evenings a week.

What will our communities look like in the future? Well perhaps the answer to that has to surely ley within the Communities themselves!

14 thoughts on “The End of another Bedminster Down landmark”